No heat or electric since early in the day on Saturday. I've been sleeping under a pile (2) cats in an effort to stay warm. Early this morning I awoke with a red nose and numb fingertips. I've been living off apples and cashews. Trees are dangling on wires and split into pieces along roadways. It's been moderately intense.
Tomorrow the power is anticipated to be turned back on, but some of the towns around us won't have it until Thursday, so it's hard to tell. You become very aware of county and township dividing lines in this sort of weather. Roads will be clear until you pass the county line, then they are covered with tree branches and slush. I'm huddled here on campus. I may stay over until power gets back on at home.
If power comes back tomorrow, it will be just in time to start typing my NaNoWriMo masterpiece. 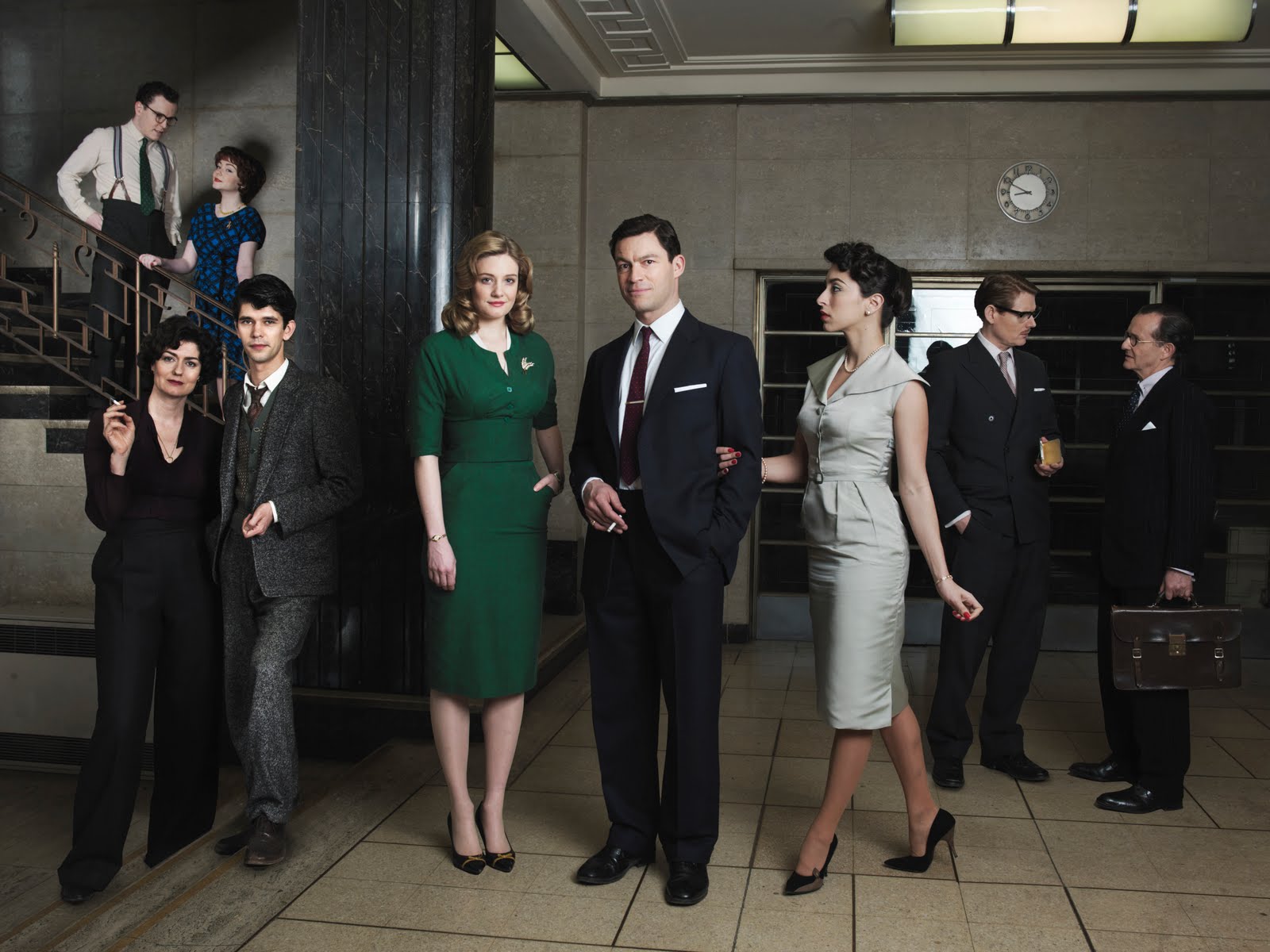 I was down with a fever and swollen glands last week, so to pass the time I immersed myself in the BBC series The Hour.
It surprised me that I hadn't heard about it sooner, it's a fantastic series. With all the Mad Men fever, more and more mid-century set dramas keep popping up. However, most of these dramas (Mad Men included) seem a little caught up in the costumes and the time period. The Hour makes the 50s seem immediate and fresh.
The struggle of BBC journalists amidst the cold war is full of moments of suspenseful drama. We follow Freddie (Ben Whishaw) as he decodes and unravels the involvement of MI6 with the death of a childhood friend. The reporters and staff of the program must also fight to deliver the news truthfully in spite of blockades and censorship from the government.
The cast is phenomenal. Romola Garai plays Bel, the producer of the news show called "The Hour." Though she inevitably faces some sexism, her character is not defined by it. She is tough, but has moments of self-doubt and the very common fear of becoming her mother. Her friendship with Freddie is one that shows a softer, more laid back side to Bel. Ben Whishaw's Freddie makes a compelling leading man. His earnest, determined search for the truth shows his strength, but he has moments of immaturity and unkindness, especially with Hector, the anchorman and his romantic rival for Bel played by Dominic West. West layers what could simply a "pretty boy" sort of character with surprising depths. Excellent supporting roles played by Anna Chancellor, Lisa Greenwood, Josh McGuire and Anton Lesser round out the newsroom crew.
The writers are even more responsible than the actors for the layering of the characters. With each episode we get to know the characters more, what they want, where they are vulnerable, but it all arises naturally from within the conflicts and decisions they are involved with.
Overall, I was very impressed by the series. I hope there will be a second season and more to enjoy from writer, Abi Morgan, and the cast.
Posted by Odessa at 4:14 PM No comments:

The Lake of Dead Languages by Carol Goodman 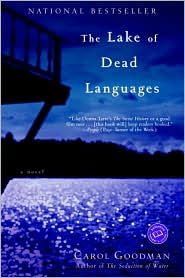 Jane returns to Heart Lake, the boarding school she won a scholarship to as a freshman in high school. After divorcing her husband, she gets a job at the school teaching Latin, but her past won't let her go.
Her senior year, her two roommates, Deidre and Lucy, as well as Lucy's brother, killed themselves. The lake holds so many memories for Jane, most of them bad. When the events from her senior year seem to be occurring again, Jane is the only person that can unravel the threads linking the past to the present.

This book is eerily similar to Goodman's Arcadia Falls, but at the same time, a much better book. The setting of a boarding school with its atmospheric woods and equal parts beauty and danger, are the setting for both these novels.
The Lake of Dead Languages is a highly atmospheric book with a suspenseful plot. However, the suspense dwindles around the middle of the book where it becomes obvious what all the plot twists will be. There are very few surprises in the latter part of the book. One keeps reading just to make sure they are correct and hoping for a new turn that makes it exciting again. Unfortunately, that doesn't happen.
Goodman assumes the sophistication of her audience, peppering it with classical allusions, thoughtful comparisons, and plenty of Latin phrases. This is refreshing when compared to authors who write down to their audiences with 6th grade vocabulary. Some of the comparisons of within the story to the writings of Ovid and others do seem a little indulgent.
I would still recommend it for fans of modern gothic literature. Part of me wants to read more of Goodman's writing because of her lushness of language. The other part is afraid I'll be stuck in the same story for the third time.
Posted by Odessa at 1:24 PM No comments:

I've just finished my reading of A.S. Byatt's Possession. It wasn't quite as luminous as The Childrens Book. It was very intellectual, less emotional, but as the stories grows, it does grip you. Part historical, part mystery, part love story, Possession explores the nuances of what ownership means. Possession of our hearts, minds, bodies, objects. It also evaluates the genre of "romance" and classifies itself as such, but presents many variations on the term.
Besides my readings for class for this week (The Friar and Summoner's tales for my Chaucer course and Toni Morrison's Bluest Eye for my contemporary lit class), I'm working my way through Corduroy Mansions by Alexander McCall Smith.
So far I'm enjoying it. Smith has a timeless, light, whimsical style and a clever way of entwining the stories of the lives connected together by the Mansions. After I finish this novel, I'd like to try some of his mysteries.
Next on the pleasure reading agenda is Case Histories by Kate Atkinson. It was suggested by my advisor and I just found out that Masterpiece Mystery is showing an adaptation of the story next week. I'm such an English major. I unwind from class readings by reading.
Today I have a respite from my classes and am using it to catch up on work as well as baking scones while singing Florence + the Machine at the top of my lungs.
Posted by Odessa at 3:37 PM No comments:

Bad Hamlet references aside, I really don't know. I really want to start my life, my writing, get out into the world and maybe travel. I have not been thinking about grad school, but my advisor suggested I really look at it.
Part of me is a little terrified that in about a year and a half I will have to go out into the world and support myself and start making my way. Grad school would delay that a bit and also throw me in the way of contacts in writing and publishing.
I've looked at Seton Hill a bit, they have an MFA in popular fiction. Their program is mostly done online with only a few weeks spent on campus (which is probably best, it is near Pittsburgh). The study of marketing and publishing your work is a major part of the course as well.
Boston University intrigues me as well. That would be a year long program of work shops and classes that would allow me to student teach as apart of the program. If I had to choose a school that would involve a move, I like the idea of Boston. For some reason I've always been drawn to New England and it's a great literary town. Their program is very selective and very specific however. They only accept 10 students for fiction, 10 for poetry, and about 6 for play writing. That would also mean I have to choose which one I want. They do have Global Fellowships in the program, though, where they send you to a country of your choice for three months to 'do there what you wish.' How amazing is that?
Of course, Emerson has an MFA in Creative writing and Publishing and Writing and they are in Boston as well.
I suppose I should leave the option open and prepare myself for the possibility of graduate school. That does mean I have to take the GREs. There are definitely some programs that sound like great opportunities, but would it be better for me to go out and find my own experiences?
Posted by Odessa at 10:28 PM No comments: