"I wonder anybody does anything at Oxford but dream and remember, the place is so beautiful. One almost expects the people to sing instead of speaking." -- William Butler Yeats

I'm falling back into life now. My study abroad was magical, beautiful, life changing, and possibly soul eating. Soul eating because I left part of myself (and accidentally part of my favorite scarf...) in Oxford. Not just in Oxford, but I feel like with the people I met there. My soul is clearly just scattered about to the winds right now. Pieces now reside across the United States, various locations in Europe, and in Australia with thirty four of the most beautiful people I ever met.

There is an Oxford shaped hole in me now. It sounds dramatic and it is. It was one of the most intense and exciting experiences of my life, a major perspective changer. Now here's the cliche bit: when traveling the world and learning about everything around you, you ultimately learn a lot about yourself (unless you have no self-awareness). I think I found what I'm yearning for. While many of my friends are getting married and having babies at an alarming rate, I'm yearning for adventure. I don't want to settle down the way they do, I want to be a nomad. I want to have all the crazy stories and the travel scars. I want to lose more of my soul to more places and more people, because I think eventually I'll find the right people and the right place to consume all the space I'll be making within myself.

I really felt like a writer there. I felt like a competent adult as well. I traveled thousands of miles from home by myself and found friends among strangers. Never did I feel overwhelmed or even very homesick.
So I've been regrouping since I got back. Mostly that means I've been plotting how to go abroad again. This is my senior year. Over the next few months I have to either get myself into good job or an academic program that won't cost me any money. On top of that, I'm hoping that one of those things will also get me out of the US again.

My novel is in a new draft, revisions have been going really well. I'm still setting store by my writing taking me places, but I'm not so naive that I think I'll have a publishing deal by the time I graduate. Even if I do, I know it can take years for a book to hit the shelves, and maybe longer to gain any attention that actually leads to your book producing money. Maybe hiding out in a grad program until it does is a good idea...
I don't know where these next months will lead me, but I'm praying for the next adventure to come knocking on my door soon. There is a small fear that it will never be as good as Oxford. My first adventure abroad set the bar so high. I understand the expression "going down from Oxford" now. Everything seems like a bit of a downer after Oxford.

I'm sitting on a bus headed for London at this moment. Oxford is fading behind me. Last night we had a formal dinner where we were given our certificates for the program. We ended up in the student bar afterwards, Grace brought her guitar. We sang songs like "Wagon Wheel." I read out some thoughts I had written down in the Fellow's Garden-- and I'm not usually one to stand on chairs and give speeches, beer in hand. Then we all headed to the King's Arms with the waitstaff, since they finally didn't "work for us" anymore.
I barely slept last night. Still, I didn't cry. I was caught up in everyone, in the shenanigans of one final night, mild though they were. I was in bed by midnight, but up long after that.
It wasn't until this afternoon, as the taxi took me to the bus station and I watched Oxford rolling past me, I began sobbing (as quietly as I could manage). The cabbie tactfully ignored my raw face while helping me unload my luggage. Now I'm sitting here with all these other travelers. There are other Americans, perhaps heading to Heathrow to go back to the states. We're all being quietly jostled in this cold bus, our luggage stowed below.
I almost ran off to Scotland for five days. I was invited by a friend, and it was very tempting, but I'm low on cash, have too much luggage, and my classes start up in two weeks.
Part of me recognizes that this particular adventure is over, I felt that yesterday. I need to go home and reshuffle my deck now.
But Oxford, you've taken a piece of my heart. And I know so much of it was the perfect alignment of people in the program. The people filled those stone wall with life, music, chaos. Somehow the program director managed to select thirty five soul mates for this program. It's sad because there are some people in the program that fill a role, a void in my collection of friends. I don't have anyone like them at home. It's a bit of a jolt to have them ripped away so soon after forming these intense bonds.
I know I'm being dramatic. I've had about ten offers for me to come and visit in Sydney, Melbourne, Vienna,  Los Angeles, Chicago, London: all the places my new friends are from. Maybe someday I'll take them up on the offer.
Posted by Odessa at 10:22 AM No comments:

Adventures of a Yank in Oxford

I guess I haven't been posting regularly because part of me doesn't want to acknowledge that time here is slipping away, that I'll be back in America next week. I want to hold this close to me, like maybe if I keep quiet, I can stay in this Oxford bubble longer, no one will notice me and send me home. 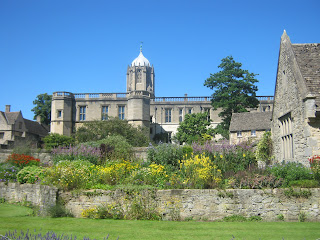 This is my last week at Exeter College and I'm profoundly sad that it's ending. This afternoon four of us went down to Christ Church Meadows and laid out in the grass reading The Virgin Suicides aloud to each other, then played Orange Under Chin, made clover chains. It seems ethereal and other worldly, partly because of the people I'm with. It's such a mixed, exciting bunch of people all passionate about the same thing I am: language, stories, books. Partly though, it's Oxford itself. The town is malleable and can be whatever you want or need it to be. There's a bustling market of high street shops, parks and gardens, pubs, clubs, museums, the rivers, tea shops, theatre: if you can't find something to do here, you aren't trying hard enough. But at the same time, it's not a huge city. There's still so much green. Early in the morning or late in the evening you have the streets virtually to yourself. 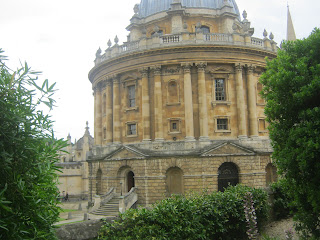 Exeter is a beautiful, history laden college as well. Established in 1314, it is (I believe) the third college of the University. It sits basically in the center of town. Perched at the top of our Fellow's Garden you can look out on the Radcliffe Camera (above) and the Bodleian Library. It's close to plenty of great pubs, the Covered Market, several book shops, a Sainsbury's, a cinema; close to all we could need here. Several episodes of Inspector Morse and Lewis have been filmed here. Morse had his famous death scene in front of the Exeter chapel (where they have glorious Baroque concerts during the week), and the 2009 Lewis episode "The Quality of Mercy" was filmed in and around the quad and gardens here.
Our program has been really wonderful as well. Every weekday we have writing professionals: publishers, booksellers, literary agents, poets, come and speak to us. We also have four seminars a week in our chosen area of literature. Everyone is always writing around the campus. There was a paper swap in the student bar and a writing party in my dorm room over the weekend. Best of all: we genuinely are working together, supporting each other, swapping ideas, and producing work.
I know writers have to keep in touch with the world, but there is something so wonderful about being in this little commune with all these other writers. Today, David Fickling of David Fickling Books spoke to us. He mentioned that he thought writing was an intensely social activity. It was funny, usually we think of the writer locked in their basement or study for hours on end, but it's true, writers desperately need to balance that solitude with social interaction, especially with other writers and readers. We need that interchange, we need to be with our species who understand us.
I love Oxford. I'm already contriving ways to come back here. And I'm so glad I came on this study abroad. This weekend though, I know I'll probably be in tears as I leave, because after three weeks it already feels like home. I can't bear to think of this town going on without me. I don't want to miss anything.
Posted by Odessa at 11:24 AM 5 comments: