The Sounds of Storytelling

When I'm not weeping over my future prospects, or doing school work, or preparing for my Italy trip (less than two weeks now!), I'm working on my new story. It's the historical fiction piece I mentioned a few weeks back. I almost always write with music. I like arranging playlists for specific stories, having music that reflects the atmosphere or some aspect of character and story.
Even though this is historical fiction, it's mostly very contemporary music. Most of the vocalists are female in this playlist, quite by coincidence, but it works since it's about a primarily female group.
Since I've been a little lax at posting these past few months, I thought I'd share a few of my writing songs with you. Feel free to link your own favorites for the creative process in the comments. I'd tell you how each song relates to the plot or theme, but that would be giving it away.
Posted by Odessa at 9:04 PM No comments:

14th Century Italian Literature: The Inferno vs The Decameron

My final seminar, the course I need to finish my degree, is on Italian Literature, and English language authors in Italy. It's an interesting syllabus full of titles and authors I'm not previously familiar with (which is always a little bit exciting). We read 20 of the 100 tales of The Decameron and now we are reading all of The Inferno, part one of Dante's Divine Comedy. I'm about to go full literature nerd. You've been warned.

In many ways, Boccaccio wrote The Decameron as a secular counter point to Dante. Where Dante wrote a divine comedy, Boccaccio was writing an earthy, human comedy. He uses a similar religious conceit in the structure of the story. Dante's Divine Comedy has 100 cantos (1 prologue canto, 33 within the Inferno, 33 in Purgatorio, and 33 in Paridiso). The Decameron consists of 100 tales told over ten days by ten tellers.
The Decameron as a whole has a subversive feel to it. It shows authority figures to be corrupt and those with the quickest wit, not the best morals, prosper. Boccaccio also subtitled his work, "of Prince Galehaut." This is a reference to the Arthurian legend of Lancelot and Guinevere's illicit love. Galehaut arranged the tryst between the two lovers. In this way, Boccaccio is signalling his audience that his tales will be of this bawdy nature.
Lancelot and Guinevere are referenced in The Inferno. In circle II, The Circle of the Lustful, Dante encounters a couple called Francesca and Paolo. Francesca tells him how she was deceived into marrying Paolo's brother. She and Paolo would meet to read together. They read the story of Lancelot and Guinevere which moved them to, in a moment of passion, share a kiss. Francesca's husband catches them and kills them both.
Basically, by subtitling his work with a reference to the that tale, Boccaccio is saying that he is writing immoral stories. He's writing the kind of stories that can land you in Dante's hell.

This seems as good a segue as any to let you know that I'm spending the first week of March in Italy with others from the class. We have plenty of literary stops planned.
I've just started a new travel blog, so most of my photos and whatnot will be recorded there. I'd love it if you guys would check it out!
Posted by Odessa at 6:49 PM 1 comment: 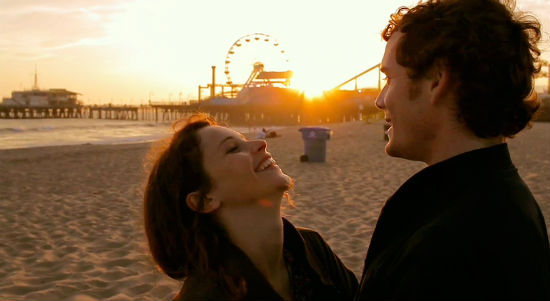 Anna and Jacob meet in LA where they're both going to college, and they fall in love. The only problem is that Anna's from England. When she overstays her student visa and is barred from coming back to the US, they struggle with keeping their relationship alive across the distance.

The premise of this film is one I appreciated. As I'm gingerly stretching out into traveling I'm meeting great people. Keeping those connections alive, even if they aren't romantic in nature, can be challenging. A friend of mine is currently trying to make a transatlantic relationship work and I've been a sympathetic ear for her as much as possible; our friendship is also a slightly long distance one as she lives a few hours across the country from me. So the subject matter of this movie seemed relevant.
Anton Yelchin and Felicity Jones play the two young leads. We watch them age believably from child-like students to adults developing careers and relationships. I've enjoyed both of these actors in previous roles, notably Yelchin in the new Star Trek movie and Jones in The Tempest and Northanger Abbey. Alex Kingston and Oliver Muirhead appear as Anna's delightful parents who provide a sounding board for the couple's relationship.
In spite of a strong cast and intriguing premise, the film was a bit lackluster. I found it to be missing something emotionally. We keep being presented with evidence of the couple's love for each other through Anna's scrapbooks and Jacob's furniture making, but something doesn't connect.
It seems that the writers Drake Doremus and Ben York Jones wanted to bring realism into the scenes. The speech patterns sound like a transcript of everyday conversations (apparently using some improv on set) which resulted in conversations often lacking eloquence, full of awkward moments, and stammering. Combined with the sometimes random, choppy time lapses and montages, what ended up resonating with me most was the disconnect between the characters. Even when Jacob and Anna are in the same room together, they seem to be an ocean apart. There's something uncomfortable about much of their interaction.
When they're apart they seem to quickly fall in with other lovers, making me doubt their devotion to each other even more. Yet they display jealousy at the thought that the other might be seeing someone else as well. Perhaps that's why the ending of the film leaves us with some uncertainty, it isn't a brick wall happy ending, but it isn't entirely without hope. We're unsure of how they'll end up. I do have applaud the sophisticated, mature way it was ended without crushing or soothing us, showing the audience something a little more difficult, a little more real.
I wanted to like this film and it wasn't terrible, it just didn't strike me the way I had hoped. The romance it revolves around was hard to have faith in. I kept wondering why the characters didn't move on, if they were trying and force something more out of a youthful fling. It was first love, but maybe not permanent love.
Posted by Odessa at 5:22 PM No comments:

As a child I tried a sip of wine at a wedding. After I had wrinkled my nose in disgust, my mother told me it was an acquired taste. Someday I would feel differently. Perhaps I was just a precocious or challenging child, but I had to ask, "Why would anybody take the time to acquire a taste?" And I couldn't understand why you would drink something that wasn't quite pleasant.
As I grew older, I did in fact acquire a taste for many things that I initially couldn't tolerate: beer, wine, cheddar cheese, tomatoes. In fact those are practically four of my basic food groups currently. I've found that tastes other than those in my mouth have developed as well.
In high school, I couldn't stand Virginia Woolf. My advanced placement English group read To the Lighthouse. I found it tedious. I didn't like Woolf's style. The whole thing felt rather pointless to me. Last year I came back to it. I admit that I was reluctant to revisit the novel, I only did so for a British literature class. Imagine my surprise when I found that there was something in the novel I had missed the firs time around: humor. With the space of a few years between me and my previous experience with the book, I found it to be a very different text. This summer I read Woolf's Between the Acts and found that to be a very interesting, if somewhat fatiguing book.
That's the strange thing about novels. They may not be factual, but they tell us truths. Usually truths about ourselves. Many readers will have one book they return to over the years that stands as a sort of gauge for that. The text remains the same. We're the ones who change.
Literature is not entirely unique in this way. I've had similar experiences with music as well. When I first heard The Decemberists, I wasn't sure about them. There was something odd about their sound. It was like my ear needed to be calibrated to their music. And eventually it was. Now they're one of my favorite bands.
Perhaps that's the difference between disliking something and needing to acquire a taste for it. Things that you acquire a taste for are unsettling. You don't like them at first, but there is something intriguing about them. Something deeper to the taste, the sound, the text. When you spend more time around it or return to it later, you begin to uncover that depth. It's almost like you have to work for your appreciation of that that thing. That makes your attachment to it greater in the long run. Maybe it's a little like falling in love? But, matters of the heart are not my area of expertise.
What things have you had to acquire an appreciation for over time? Or what things have you considered trying again after finding it initially unappealing?